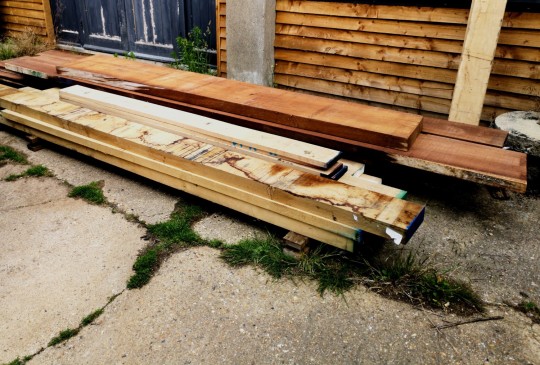 Usually when we order timber it is for 2 – 3 projects, they could be doors, windows, wardrobes, alcove units etc but usually these projects are varied, although we make a lot of Front Doors, it is unusual to make 3 consecutively.  I thought it interesting which is why I took the photo, that the lengths of Oak and Iroko that looked so raw and rustic, would eventually take shape into 3 front doors.

These boards would be cut, dimensioned and shaped to a design desired by the client, adorned with metalwork accoutrements  and then decked out in a new colour, they would then travel many miles to their new homes  and be admired and used my many people over the years. 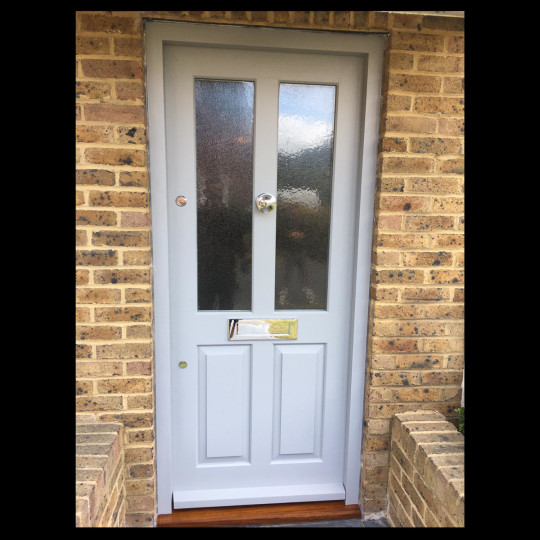 The first  front door to be created from this pile of timber was to replace a front door on a relatively new estate. Front doors fitted to new builds are of notoriously poor quality and our client wanted something a little more substantial.

As the house was on an estate the front door could not be too different in style to others on the street. It was made from Iroko, had textured double glazing and the ironmongery was in a polished chrome – this  worked well with the colour, which was Valspar Callisto. In this case the remit was to make a loose copy of the original with small tweaks to allow the door to blend in with its neighbours but to be more individual on closer inspection. 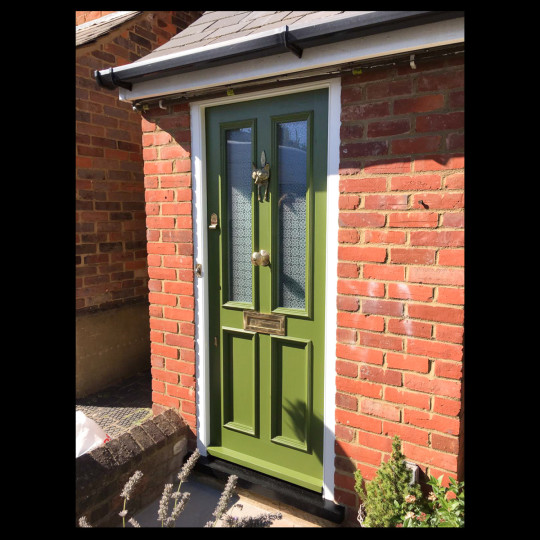 The front door that we constructed alongside this was similar in the 4 panel design but it was more classic with its belection moldings. We love belection moldings as they not only frame the panels but each step in the molding adds depth to the door, as light falls upon it it casts numerous shadows that will create many different shades of the chosen door colour.

The glazing here was the etched Canterbury design from Pilkington, which in many cases can be too much, but here we reckon the client made an inspired choice.

We are keen to deliver a front door that our clients are truely happy with, and after painting the door in Primrose Hill by Mylands our client wasn’t entirely convinced by her initial choice, so we put the door aside and awaited a new colour.  After much deliberation and referring to colour charts from Zoffany, Little Greene, Farrow and Ball, Mylands, Fired Earth and Dulux, the colour of choice was Jewel Beetle from Little Greene which worked well with the unlacquered brass work front door furniture.

The final flourish with this door was the addition of the antique fox knocker which had sat proudly on the old front door for many years and due to its sentimental value, would now announce visitors on its new front door home. 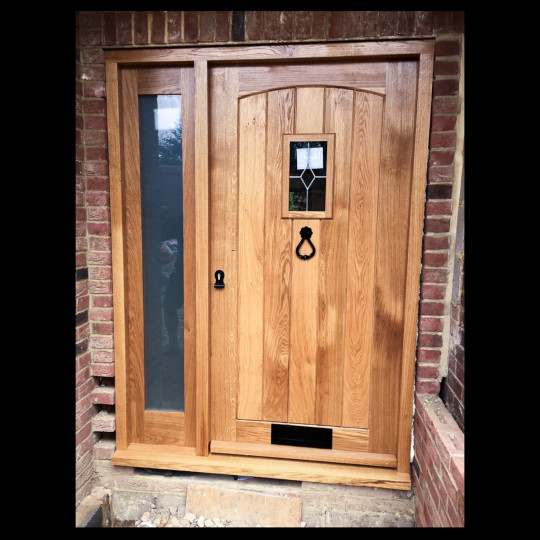 This Oak Front Door was to be the finishing piece to a large house renovation. We had a deadline to meet that would coincide with the builders completing the majority of their work, we often agree to tight deadlines and are proud to say we have never missed one so far.

As we machined the oak we were pleased to see that it had a nice attractive grain pattern and nothing to straight and uniform, sometimes we will change a board if we feel it doesn’t suit the look of a front door or its grain clashes too much, in this case it all worked together nicely.

The side panel was double glazed with Opal Laminate to be obscure but to let light in and the central panel in the door had a simple piece of leadwork to lift the design a little.

It was finished in a natural finish UV OSMO oil to really bring out the warmth and contrast in the oak grain. The knocker, letter plate and cylinder pull were of the From The Anvil range which although rustic were simple and elegant.

I need to re-visit this door now the builders have finished to see it in a fully finished environment.

People often email or ring up and ask if I could send them a catalogue of our front door selection or if they could drop by the workshop and browse our doors. But, we don’t have a range of doors, each door is bespoke to the client, it all starts with a pile of wood and a client with a picture in their head.